In this article, I'll show you how to make a glowing orb. The orb is a fun, round flashlight useful for lighting your path in a magical way. Consisting simply of LEDs, a tennis ball, a battery and a switch, it's a great simple project for beginners with electronics. Here's a video of it in action: 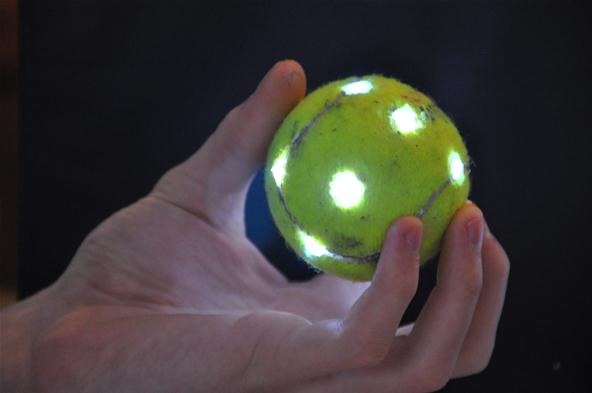 If this bounces, it's great for playing with a dog in the dark. very cool.

It doesn't bounce very well, unless you fill it with silicone :) For those who want a bouncy orb, just buy some standard silicone and squirt some into the ball before you glue the hole shut. Allow to dry for about two days, then seal up the opening.

Very cool. 6 months out of one charge is amazing.

i know! those lithi-ion cell phone batteries have quite the capacity. of course, that was six months of intermittent use, not constant.

Can't see anybody using it constantly! Six months is definitely good, unless Fido bites down a little too hard. :) Now I just have to find my old cell phone battery...

A great way to get old cell phone batteries (and their attached cell phones, for the matter) is to go to cell phone stores and ask for a couple recycled cell phones people have turned in. They usually are happy to get rid of them :)

I'm curious to how my kitty will react to it xD.

I love LED lights. They cost a lot initially for your house, and theyre a little dim, but my blackouts are always drawn anyways because I use a projector instead of a TV. But they're so worth it. Lights barely contributes to my electric bill now because of how little electricity they use :D.

nice! and also, you can power them with very little power. i saw someone who electrolyzed water using a solar panel, then turned the hydrogen and oxygen back into water and captured the electricity ,and powered several LED lights :) of course, you could simply charge a battery...but the idea was cool lol

Neat idea. Have you tried using the multi-color LED lights? The ones from Radio Shack will cycle through seven different colors with no special circuit needed. It's built in to the LED.

yeah i have! only with a ping pong ball :) the only issue, they take lots of power

How about a light chaser circuit for your LEDs?

that would work, in fact, thats an awesome idea...i could implement a little 8pin PIC chip or atmega chip in there and create synchronized patters.... :D

Check out www.talkingelectronics.com under PIC Projects "LEGO Chaser" It uses a PIC12F629- Seven routines on two sets of 10 LEDs