If you're not familiar with electrons, copper coils, and generating voltage with a fluctuating magnetic field, don't worry, I'll go into these concepts in this section.

For the sake of example and metaphor, let's say electrons "live" in conductive wire. When a magnetic field passes by the wire, it excites the electrons and they begin to move. Once the field stops moving, so do the electrons. This concept is the primary way we generate electricity; using coils of wire and powerful magnets. If you've ever seen those "shake" flashlights, the little silver cylinder that's being shaken is actually a powerful magnet moving past a coil of copper wire, exciting electrons. An EMP generator follows the same concept; a high current pulse of electricity is released through a single or double loop wire antenna, creating an intense magnetic field that, in turn, excites electrons in any metal in the range of the magnetic field. This creates a large voltage surge in the surrounding electronic components, and effectively fries any sensitive transistors, ICs, etc. 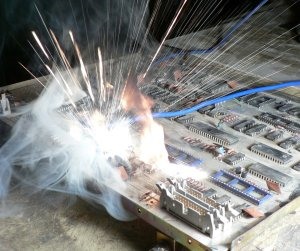 There are two ways an EMP generator can create a magnetic field; either by a very powerful single-pole pulse, or a less powerful fluctuating-pole pulse. Both have their advantages and disadvantages. For example, a single pulse EMP takes much more current than a flux-EMP, but has a larger range and less components. Since in a flux-EMP there must be an alternating (fluctuating) magnetic field, it requires power transistors to switch the current's polarity through the coil, and also hall effect sensors (magnetic field sensors) as well as an IC.

In the past two articles, I've been focusing on the first method, the high current single pole pulse method, since it is the simplest concept and relatively easy to build. Also, if misused, flux-EMPs can cause catastrophic widespread damage to electronics, even if only wiping local flash and drive memory. Through multiple experiments, I've found that a simple single-pole EMP can easily wipe the local flash memory of any device up to three feet, and render any electronics permanently useless from about an inch.

Keep in mind, this is the simplest of possible designs, consisting of three single-loop antennas, a couple capacitors, a switch, and a transformer. Ideally, focusing the magnetic field into a beam-like shape would work the best, but magnetic fields are very difficult to work with. However, it is quite possible to create a short focus field, and that is exactly how a simple single-pole EMP functions, rather like a solenoid. They key is parallel coils that "drag" the field through a "tube", and spew them out the other side before looping back around to the opposite pole. 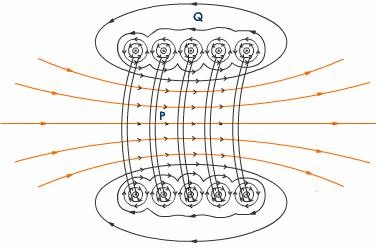 As seen in the photo above, the red lines represent the "squished" magnetic field as it moves through the coils of wire. The circular black ovals (with arrows) represent the looping field, as it returns to the opposite pole. This field as the potential to excite electrons in any conductive metal within the field, and the strength of the pulse (field) determines just how excited they become. To put it simply, the more the electrons move, the higher the voltage spike inside the surrounding electronic circuits, and the higher the voltage spike, the more damage done.

If you're interested in other articles involving high voltage, magnetic pulses and weapons, check out How to Make a Coil Gun and Chained Lightning: The Jacob's Ladder.

Great description. It's helping me wrap my head around the whole concept. Is the fluctuating-pole pulse the same as the "explosively pumped" one? Is that what they used in Ocean's Eleven? Or is that an entirely different class of EMP? (Not that the one in that movie was "scientifically accurate" or anything)

Well, the explosive EMP simply uses a directed explosion to "force" the magnetic field in a linear direction. The flux-pole pulse simply modulates the general magnetic field to have a greater effect on electrons in surrounding conductive material.

Ohhh.... Now I get the difference. Makes total sense that the explosives in that one would force the pulse and that's it. Thanks.

Chris is one smart kid, for real.

haha, thank you :) and yeah, the explosion actually starts at one end of the EMP, and "blows up" the current-filled windings. This also forces the magnetic field down the coil as well, until it gets to the last few windings as an intense blast :)

"If you're interested in other articles involving high voltage, magnetic pulses and weapons, check out How to Make a Coil Gun and Chained Lightning: The Jacob's Ladder." WIN. WIN. WIN.

As well as the smell of napalm in the morning, right?

Even more better. Who is this genius? He has, what, electromagentic napalm? I do not mostly understand.

what is the purpose of the transistor in a emp device?

To disturb other electronic deviceces

is it possible to shoot a emp charge through a ring/chamber of ionized gas /plasma to form some sort of projectile?

Please explain if this is an idea that can be adapted for creating a much smaller application.

Is the use of a capacitor or transformer really required?

For a much smaller appliction?