What is the NIF? Located in California, the NIF is a large facility housing two humongous lasers. The facility is part of the Lawrence Livermore National Laboratory. Basically, NIF's main purpose is to focus lasers on a small, compressed amount of hydrogen until fusion occurs. NIF is the largest inertial confinement fusion built to date, since the project began back in 1997. Consisting of two laser bays, the NIF is capable of over 1.8 megajoules of laser energy. The laser target bay looks like something out of Star Wars: 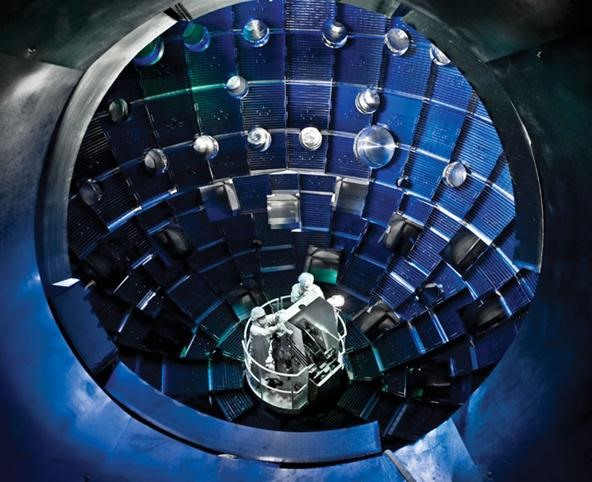 The target itself (pictured below) is tiny compared to the chamber. The target is called a hahlraum, and holds the hydrogen fuel capsules. Beautiful, in its own ominous way: 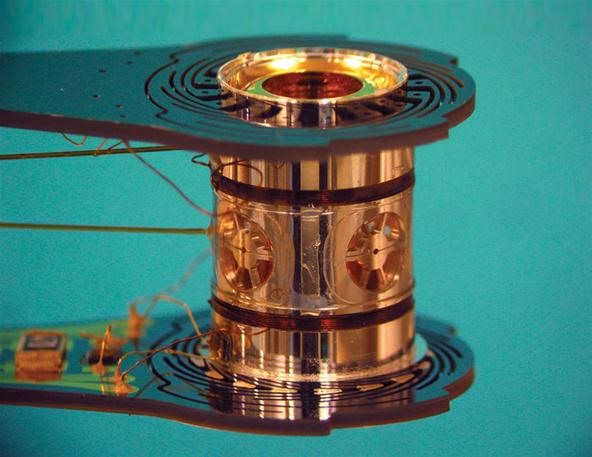 The target chamber itself is huge, each laser having its own entry point. The chamber contains temperatures of over 100 million degrees, and pressures extreme enough to compress the target up to 100 times denser than LED. The chamber is equipped with hundreds of measuring devices ready to measure every minute detail and event occurring: 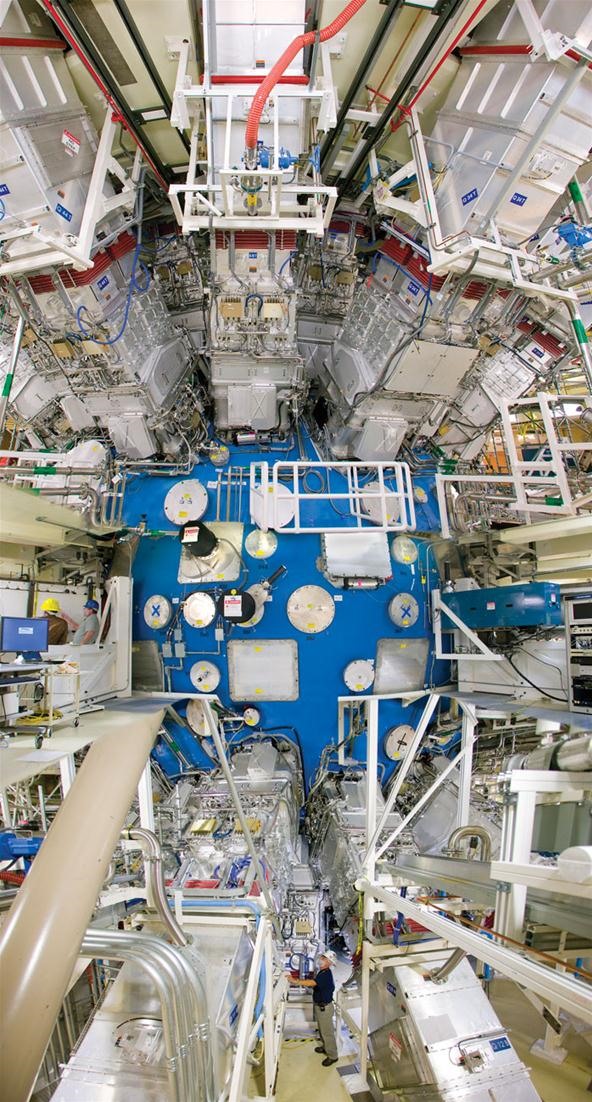 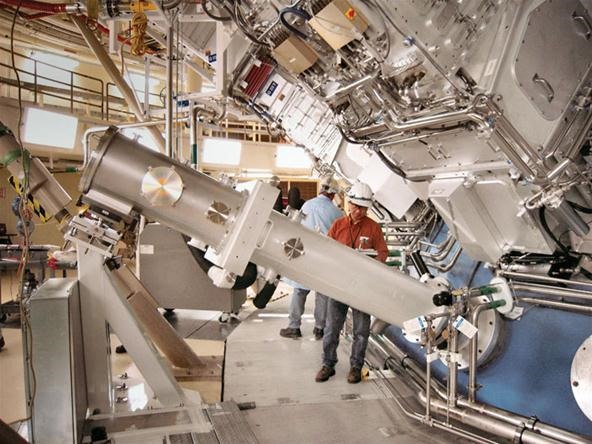 The lasers themselves are quite complicated in function. Simply put, a large "flash" of light is created by several xenon (pronounced zee-non) lamps, then amplified to desired energy levels and released on the target. If you're not familiar with xenon lamps, pick up your average flash camera, and take a closer look at the flash. The small tube you see inside contains xenon, and when large amounts of energy travel through the gas, it produces a bright flash of light. The NIF uses a similar concept, however on a much larger scale. Here's a very complicated schematic of how the lasers work:

What Does This Mean?

Basically, NIF aims to create usable, manageable fusion in a small, confined space. How difficult is this? Extremely difficult. The NIF, if functioning as desired, would be giving birth to a small sun in a metal sphere. The potential for nuclear fusion is profound; if this project succeeds, it could end the world energy crisis. Conceptually, the only fuel needed would be salt water, and a lot of laser energy. Ideally, the reaction itself would be enough to provide energy for the function of the lasers, as well as provide plenty of energy left over for practical use. For more information, photos and more, see their website here.

I've seen pictures of this facility before and am so struck by the beauty of the mechanisms. My background is in art and design (not science), I'm so inspired by how often design in technology and nature can trump all…

Artist Tom Sachs is a good example of somebody clearly fascinated by this. check out his faux NASA art -- http://www.tomsachs.org/works

i love art and science! This NIF project could and most likely will change the world with both advancements in technology and inspiration :)

I have to say, the precision construction of that hahlraum is really beautiful with its spiraled mounts and polished finish.

I visited the facility when they were building it. I think it was in 2002. Amazingly impressive. The lasers themselves are housed in a building that is about the size of a football stadium. The chamber itself really does feel like something from Star Wars when you're inside it.

The stated purpose of the facility is actually weapons research...so we don't have to do underground tests of thermonuclear warheads. Hopefully there will be many other benefits to the facility.

I thought that this chamber was to create fusion between the hydrogen coils then maybe get return energy by the fusion of the hydrogen?
Am I wrong?
Whatever their purpose, they are dealing with powerful stuff, i hope they know what they are doing :D

This article does a reasonable job of explaining it: http://www.economist.com/node/13726730

Basically the funding for the facility pretty much exists because of weapons testing...that doesn't mean a lot of other experiments won't be done as well.

As long as they know what they're doing and don't accidentally make our planet self implode!
Instead of weapons testing why don't they concentrate on free energy or something that saves lives instead of taking them? Just my 2 cents...

it has to do a lot with politics.
during the cold war, there was a fear that if another nation surpassed the US in military might, they would impose their ideology upon everyone.
so therefore, instead of concentrating on free energy, or the like, many US scientists were focusing on military might instead of more energy related stuff.

I guess that the cold war fever still lasts today, and the government still has to keep ahead of everyone else in the military game.

However, there are many many people who want to work on free energy, but just lack the funding to preform their experiments (or had bad ideas in general)

after trying to figure this stuff out, its much easier to destroy than to create. Just ask any griefer :P

haha, also, the NIF is actually military funded, because if it does work out, it'll do wonders for the world of future weapons (think handgun lasers)