In this article, I'll show you how to make a small, weaponized highlighter. Before I get into how to built this device, let me warn you. This device is harmful! When used, it can cause burns and/or serious muscle spasms. The voltage is potentially deadly! DO NOT attempt to build this device unless you are experienced with safety, electronics, soldering, and understand circuit schematics.

Here's a video of the final product: 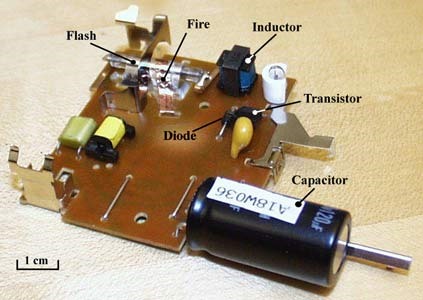 2. Dismantle the highlighter. Take out the ink and felt tip and dispose of them.

3. The circuit is quite simple, consisting of the transformer, transistor, resistor, and diode from the camera circuit. Follow these steps to create the circuit, or the schematic below (circuit must be made standalone, with NO protoboard). 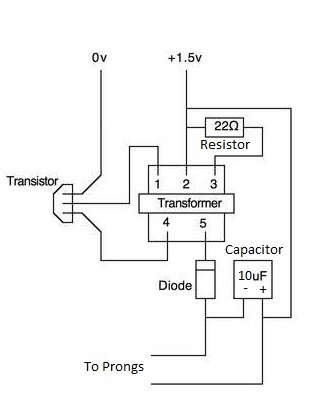 Ensure the final circuit is as small as possible. It should look similar to this (the little black battery-like object in the top right corner is the capacitor): 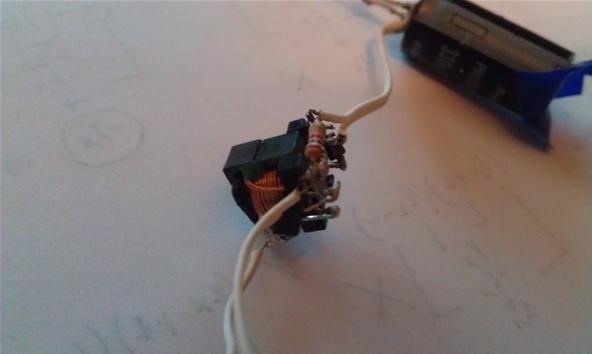 4.  To build the switch and battery, take your temporary button and solder two, three inch long wires to the prongs of the switch. Next, melt two holes in the bottom cap of the highlighter. insert the wires, then glue the switch to the outside of the cap (see image below). Solder one switch-wire to the positive side of the battery (see image below, black object in top right. Similar in looks to a capacitor but without the white line). Solder the second switch wire to the positive of the transformer circuit. Cut a one inch piece of wire and solder it from the battery's negative to the transformer circuit's negative.

Note: I used a different type of battery, but AAs work just as well. 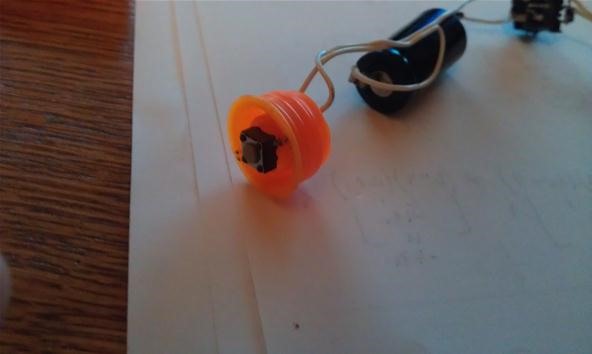 5.  Cut two, two inch long wires and solder them to the capacitor. Next, locate the diode and ground portion of your circuit (note: The capacitor is already shown on the schematic). Ensure the polarity is correct (the diode connects to the little white line on the capacitor, or negative prong). Now, take the needles mentioned earlier and cut off any "end-nub" part of the needle. Solder the needles to the capacitor like this:

Note the small piece of electrical tape on the end of the capacitor. This is important to prevent shorting, do not forget it. 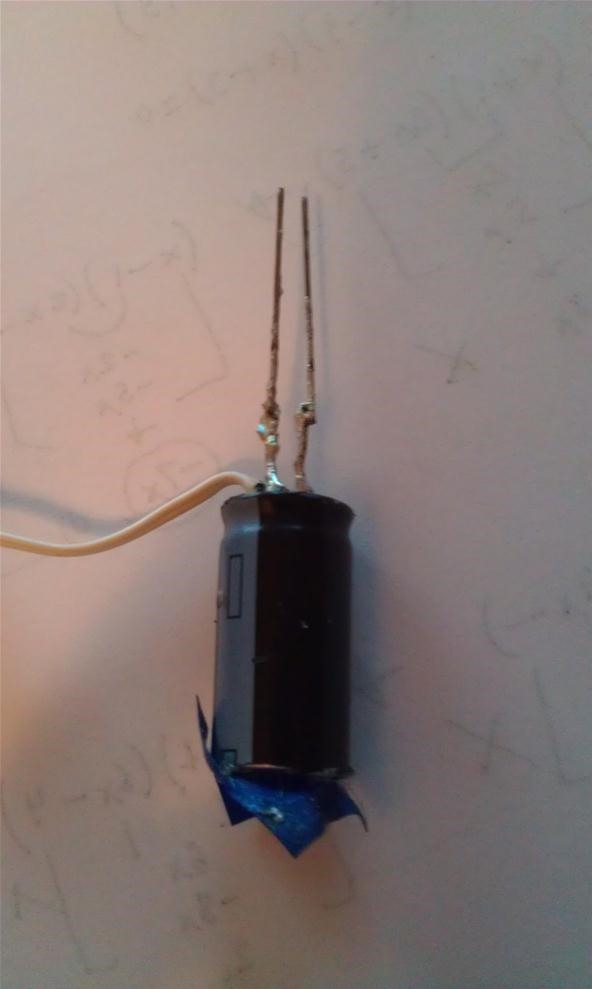 The layout of the highlighter insertion (in order from bottom to top) should be:

It should look something like this when built correctly: 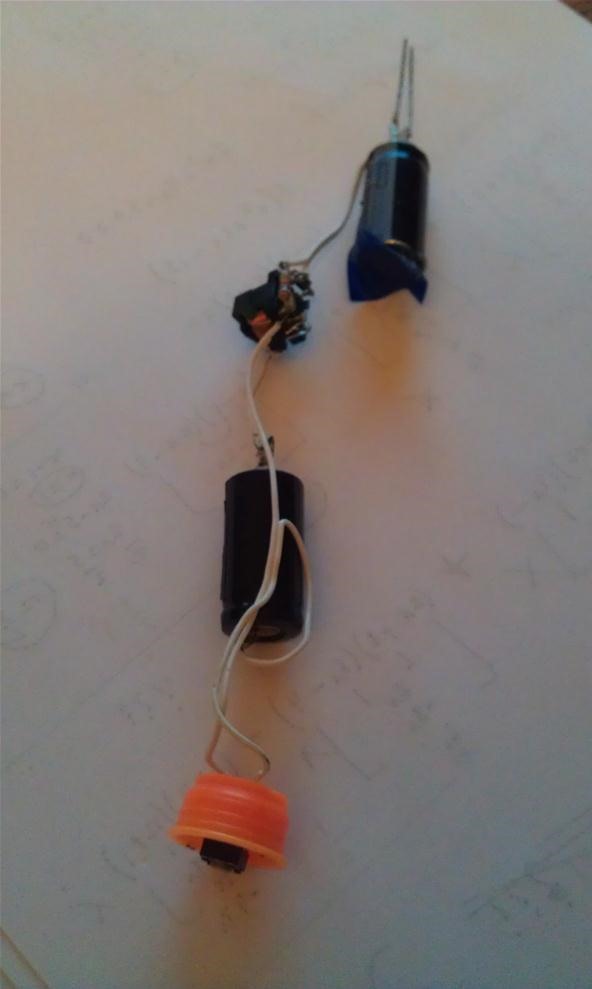 7. Test it, ensure it works properly. When the trigger button is pressed, a high frequency "weeing" should be heard. After a second, short the two prongs with a screw driver, if working properly, there should be a spark. Be careful! Don't shock yourself.

7. Once soldered and tested, carefully insert it into the highlighter case. The capacitor should fit all the way into the top portion of the case, and the needles should stick out of the end about half an inch. Inject hot glue into the top end, and aline the prongs (needles) so that they are in the center of the pen-hole (do all of this before the hot glue dries). Allow the glue to dry, and carefully insert the rest of the circuit. The transformer unit should fit in sideways, like this: 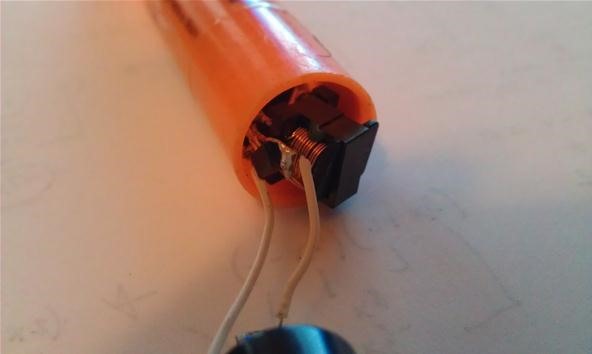 8. Clip in the end cap, and your done! The battery should last a good 2000 charges, so there shouldn't be a need to recharge for a long time. When necessary, just pop off the end cap and charge the battery. To use, pull off the cap, press the button on the bottom, and short the two needles. Before you test it on people, get their permission first, unless they're occupied in attacking you.

If you're interested in other projects related to high voltage, check out How to Make a Coil Gun and Prank Stun-Baton

SO badass that this the taser is concealed in a highlighter.

I finally found the perfect toy to spice up those monotonous nights with the missis.

Seriously though, this is one awesome how-to. Much props sir.

So cool. How long does it take to charge between shocks? This reminds me of the time we hooked up a tazer to a giant "Operation" game board and had Johnny Knoxville shock the hell out of Danger Aaron on Late Night with Jimmy Fallon. The video is up here...

lol awesome! it depends on the capacitor you use. I used one around 8 uf, it takes less than a second to charge.

Haha, this is super hardcore, I'm totally making one.

haha, if you want to use it as a prank, just use a lower capacitance on the capacitor. For example, around 1 uf works great to scare your friends....

who is the nuber of transistor please tell me!!

who is the number of transistor please tell me

Its a classic NPN transistor, any 2N or BC should work great.

You showed the image of the complete "circuit thing"(third image), but, can you explain to me how to build that tiny "circuit thing" step by step? I'm asking you this, 'cause its the first project like this that I'm trying to build. Can you help me?

Check out step three, i link the instructions to building the tiny transformer.

Pure hardcore son.. :P
I'm totally making it. just wanna know one thing, what kinda transistor did you use?

And i wanna make one for my gf for you know safety purpose. so if i wannna make it powerful enough to bring someone to unconscious (not dead) what kinda capacitor should i use? will 10uf work?

what kind of transformer is this??

My circuit won't work. I followed the schematic exactly except with a bigger transformer. Any help?

what is the pin layout? I have a different transformer and wish to know which pin is which.