In this series on weaponized lasers, I'll be exploring the function, operation, strength and building instructions for three basic laser weapons; CO2, Diode, and Flashlamp. These laser types are just a few of many, selected because of their simplicity and basic construction (depending on your experience).

This article covers CO2 lasers, an extremely dangerous, powerful, invisible infrared laser. If you've read my other articles on electromagnetic weapons (see EMP weapons [part one, two and three] and microwave weapons), you know by now that directed energy is no longer a thing of science fiction, but rather a real-life application of physics. A simple representation of how a gas laser works:

The red line represents the path light takes within the amplifying medium. Simply put, light bounces back and forth gaining energy, then leaves the medium through the partial reflector.

CO2 lasers are gas lasers, consisting primarily of carbon dioxide, nitrogen, hydrogen, and helium. When a glass tube is filled with these gasses and an electrical charge distributed through them, energy is released in the form of infrared light. The electrical charge that is released within the tube is high voltage, ranging from 10kV to a megavolt, depending on the size and application of the laser. In this case, it doesn't take much to create a lethal CO2 laser; maybe about four to five feet of glass tube and a decent power supply. CO2 laser tubes look something like this: 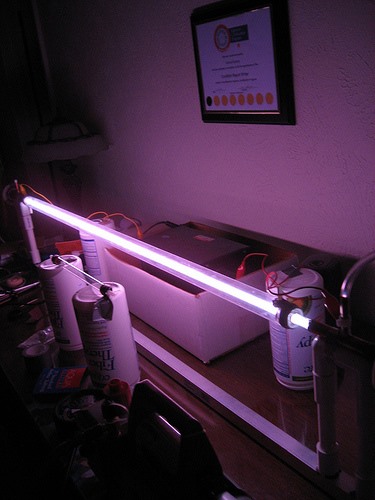 Inside the glass tube, the CO2/nitrogen/hydrogen/helium mix travels through the tube, from gas input to output. A large amount of electricity runs from one end to the other as well, charging up the nitrogen atoms. This in turn excites the atoms of CO2. When the nitrogen encounters the "colder" helium, photons are released. These photons are contained within the amplification medium (mentioned earlier), and they begin to bounce back and forth within the tube, before leaving at a higher energy in the form of infrared light. The infrared light can easily burn through paper, and depending on the size of the laser, even solid steel. Here's a photo of a CO2 laser burning a piece of paper: 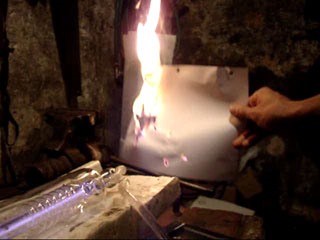 The CO2 laser tube is quite (if not impossible) to make at home using everyday tools and parts. However, these tubes are available online, and are quite inexpensive (around $1,000). The power supply itself can be made from a neon sign transformer or flyback transformer and many others, depending on the laser tube. Though the tube can be run directly from the transformer, it's a good idea to rectify the voltage with some diodes. The necessity of a ballast depends on the laser tube length and structure, for a smaller tube they are not critical (depending on performance needs). A neon sign transformer: 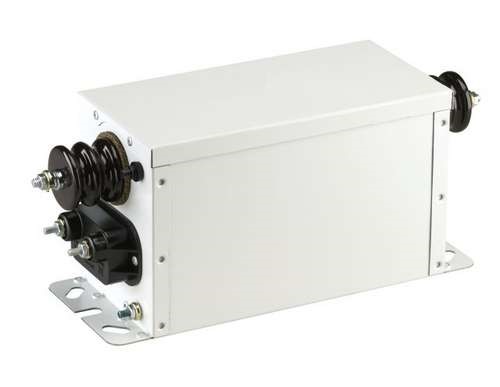 With respects to the gas transfer and pump assembly, its possible to use CO2 from dry ice, nitrogen from filtered air, and helium for balloons in the laser tube, but it's better to buy a pre-mixed CO2 laser mix. The vacuum pump can be harvested from an old refrigerator, or modified air compressor (most have a threaded air intake).

In terms of CO2 lasers, this is generally the case. The bigger the laser, the more power you'll get from it. However, there are compromises such as gas consumption and power supply issues. The opportunity for weaponization lies in the possibility of multiple, smaller laser tubes focused into one location (rather like the Death Star, only less dramatic and with no sudden beam-angle change).

If you've ever melted or burned anything with a magnifying lens and the sun, you must know that even the smallest amount of light energy can be focused to be more powerful. The same goes for infrared light energy—imagine the potential of 30 to 40 lasers all aimed at a single point... 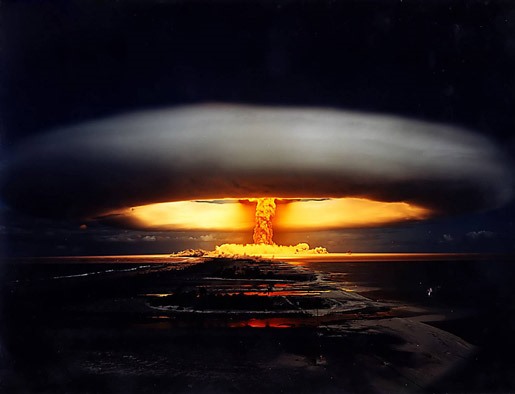 Well, maybe not that dramatic. But still, the physical damage lies within the potential energy.

Seems that a lot of the how-to's lately have been rather...aggressive. Hacks, lies, weapons of many kinds, can't we have a few more happy how-tos? How to give an effective hug? Or perhaps, flower bouquet selection?

hahaha, hmm, you do have a point there. How about i write one on glowing, mood-responsive valentines day heart charms? :)

How to make cologne ?
lol

How to make (a sonic blaster disguised as) cologne * ;)

cologne desguised as a sonic blaster. that way people wont know your applying cologne. SOnic blasters dont those only exist in star wars?

..probably? lol the concept of a sonic blaster exists, but again, we just dont have the ability to store the mass amounts of energy needed in a small handheld device, for it to be of any use or destructive potential.

But they must be electromagnetic, a bit dangerous, and probably not legal. Or maybe you can write about a glowing, mood-responsive valentine heart charm that someone else designed and you've discovered how to hack it to induce negative moods.

lol, i dont think its been invented yet....

Well, see? There's your next project. Nicola Tesla: eat your heart out!